Do You Believe in Miracles? Loretto’s Miracle Staircase 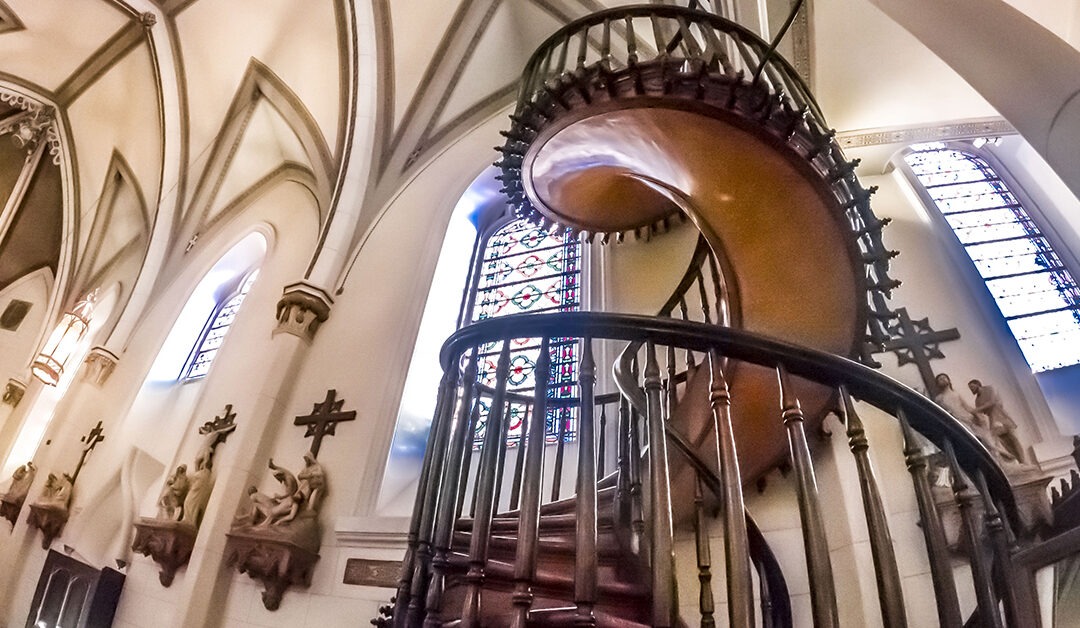 Santa Fe’s Loretto Chapel is an exquisite Gothic-style structure, the oldest in the West. It features a beautiful altar and acoustics that make a concert here a real treat. It is a perfectly scaled down version of famous San Chapelle in Paris, famous for its incredible stained glass windows. But most notable is its amazing spiral staircase, which makes two complete circles without the standard central support post. Built without a single nail or bolt, it seems to float in space as it climbs to the second-story choir loft. Many people feel the “hands of God” hold it up, and legends support its title as the “Miraculous Staircase.”

Which of the following factors might lend themselves to the staircase’s nickname?

The edges of the steps are unrounded, as if new.

4. It has hardly aged after over a century of daily use.

The story goes that the Sisters of Loretto had almost completed the church when they realized they had not designed a way to reach the choir loft. Nor could the small church accommodate a normal stairway. In a quandary, they decided to hold a Novena, a nine-day Catholic prayer ceremony, to seek a solution. At the conclusion of the Novena, the next morning there was a knock on their door. There stood a man with a burro loaded with woodworking tools.

“I’m here to build your staircase,” he told them. Shocked but pleased, they led him to the church and he went to work. It was a rough winter, with deep snows clogging the streets, and the sisters kept only a loose eye on the project. One day they came to visit and saw the stairway looked complete. They went to the worker’s lodging but found his room empty and him gone. He had not been paid or thanked. They’d been visited, they concluded, by no less than St. Joseph, the patron saint of carpenters.

The ageless structure, its foreign woods, the lack of a support post, its astounding double spiral shape, its composition of just wood with no strengthening metal fixtures, the lack of records as to its builder, and the fact it still stands some 150 years after its construction all lend themselves to its nickname as the Miraculous Stairway. However, other sources suggest the builder was known—Francois-Jean “Frenchy” Rochas—and was paid. So, the question becomes, “Are you believer?”

Believe it or not ghosts still inhabit the hotels of Santa Fe. Soviet spies took selfies with our statues, and bodies are buried beneath the streets. To learn where, check out a DiscoverSantaFe Scavenger Hunt. We’ll reveal to you these and other mysteries, and make a believer out of you as to Santa Fe’s extraordinary character.