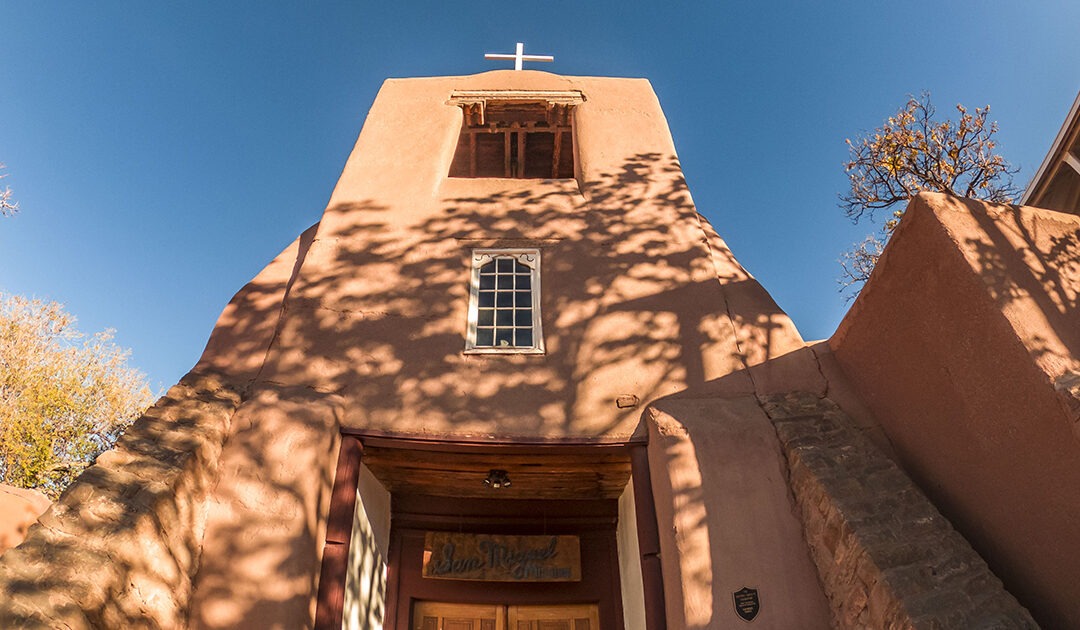 Age oozes from its thick earthen walls, the paintings on curling buffalo and deer hides, its dark, musty viga ceiling. If the bultos on the altar could talk, what tales they’d tell. Of workers sealing floors with ox blood to harden them, the day Pueblo warriors descended upon it when sacking Santa Fe, its rebuilding, and its reputation as the “oldest” Catholic church in the United States. But is this last fact really true?

Why is the church’s claim of being the “oldest” disputed?

A. Its electric light fixtures prove it’s not old.
B. St. Augustine, Florida, is home to an older church.
C. It is not the original church that stood on this site.
D. The earliest photo was taken of the church in the early 1800s.

St. Augustine may have been founded earlier than Santa Fe, but it was destroyed and abandoned.

C. It is not the original church that stood on this site.

The chapel is thought to have been built in 1610, but the oldest written record of it dates to 1629. The lack of written confirmation as to its exact age adds to the gray nature of its claim as oldest. But more to the point, San Miguel was burned down during the Pueblo Revolt of 1680, and then rebuilt around 1710 on its earlier foundations. So, its foundations may claim to be the nation’s oldest, but not the superstructure. In addition, the Franciscan missionary priests established dozens of far-flung Catholic churches throughout New Mexico. St. Augustine Church at Isleta Pueblo is thought to have been built in 1609, which if true, makes it older than San Miguel—but it was also largely destroyed in the Pueblo Revolt then rebuilt. And other Catholic churches were built in New Mexico in the 1600s that escaped being destroyed in the Pueblo Revolt. So, is San Miguel really “America’s oldest church?” History is often shades of gray and the debate continues among scholars.

Because adobe easily erodes if not maintained and many early churches suffered from armed attacks, exact dating of such structures is a challenge. Written records about early buildings were slim to begin with, and much of that information was lost or destroyed over the years. To explore these mysteries in greater depth, join us on a DiscoverSantaFe Scavenger Hunt and visit San Miguel in person.