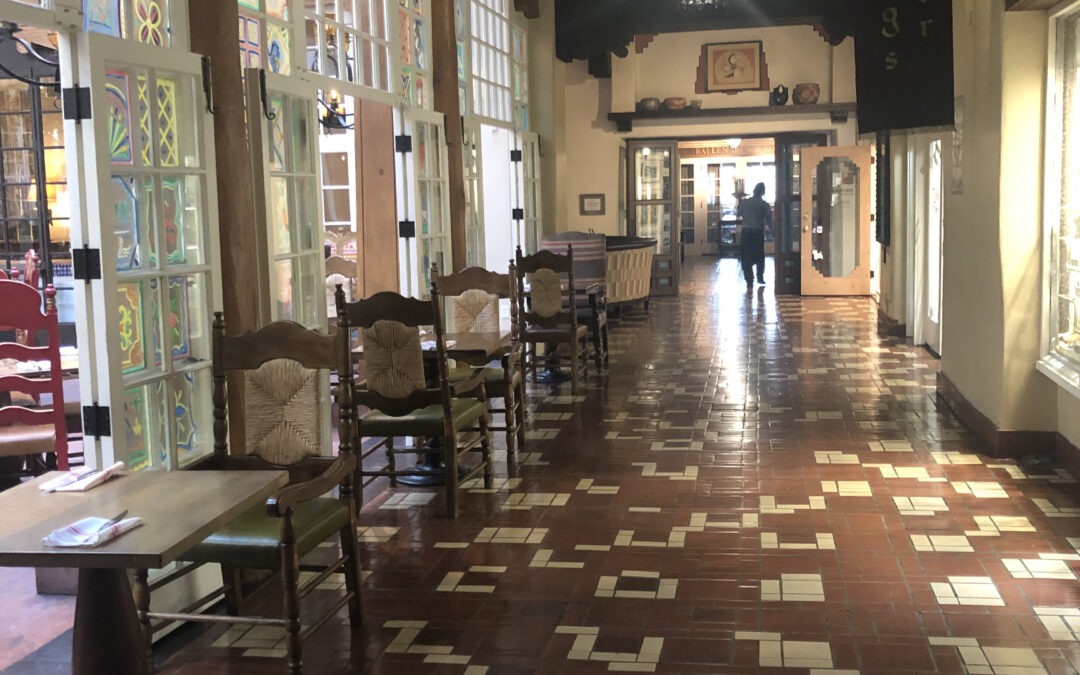 Santa Fe has never been a pacifist’s enclave. In fact, over its long history it has seen heads on spikes in the Plaza, dozens of Texans’ ears nailed to walls in the Palace of the Governors, Indian battles in the streets, and violent crimes committed with fists, knives, and guns. However, one commercial establishment in particular has seen more than its share of bloodshed and mayhem. Because within its walls, important political figures were taken down, competitors in love eliminated, and some simply drunken crimes committed.

What commercial Santa Fe establishment does history point a bloody figure at most often?

This business is also known as “Santa Fe’s Living Room.” Furthermore, it is thought to be the site of the oldest overnight accommodations in the nation. While the Palace Bar undoubtedly saw its share of violence, being the former site of a major gambling den, cantina and bordello, its armed guards keep the pandemonium within bounds. 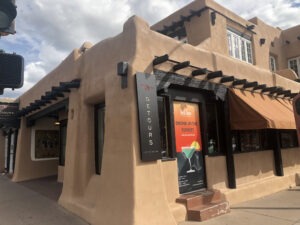 This corner is thought to be the location of the original doorway to the Inn, where Lamy shot and killed Mallet.

Formally named “La Fonda on the Plaza”, the inn has seen a number of buildings come and go over the past 400 years.  The corner that faces the Santa Fe Plaza is thought to be the oldest part of the structure. In the 1600s, it was used as accommodations by visiting dignitaries and officials. It also served, briefly, as a courthouse.  Accordingly, it is said that men were hung inside its walls. In the 1800s it was known as the Exchange Hotel. The Exchange was frequented by American traders, businessmen, officials, miners, trappers and soldiers. Of course, it was also home to a “watering hole” that fueled many a conflict.

In 1867, a long running dispute between John P. Slough and Captain Rynerson, a member of the Territorial Legislature of Dona Ana County, climaxed with Slough being fatally shot by Rynerson in self-defense. In 1879, John Lamy, the nephew of famed Archbishop Lamy, approached the hotel in a rage when he discovered his prominent and extremely beautiful wife, Dona Mercedes Chavez, was having a very public affair with an architect, Francois Mallet. Lamy shot and killed Mallet in the hotel doorway.  As you can see, the tales go on, and on, and on.

As you can see, the streets of Santa Fe have been washed in blood.  If tales of murder and mayhem pique your interest, be sure to sign up for DiscoverSantaFe’s Santa Fe Plaza scavenger hunt. We’ll guide you through Santa Fe’s colorful past to famous movie scenes, jaunts where Soviet spies exchanged nuclear secrets, and much more!