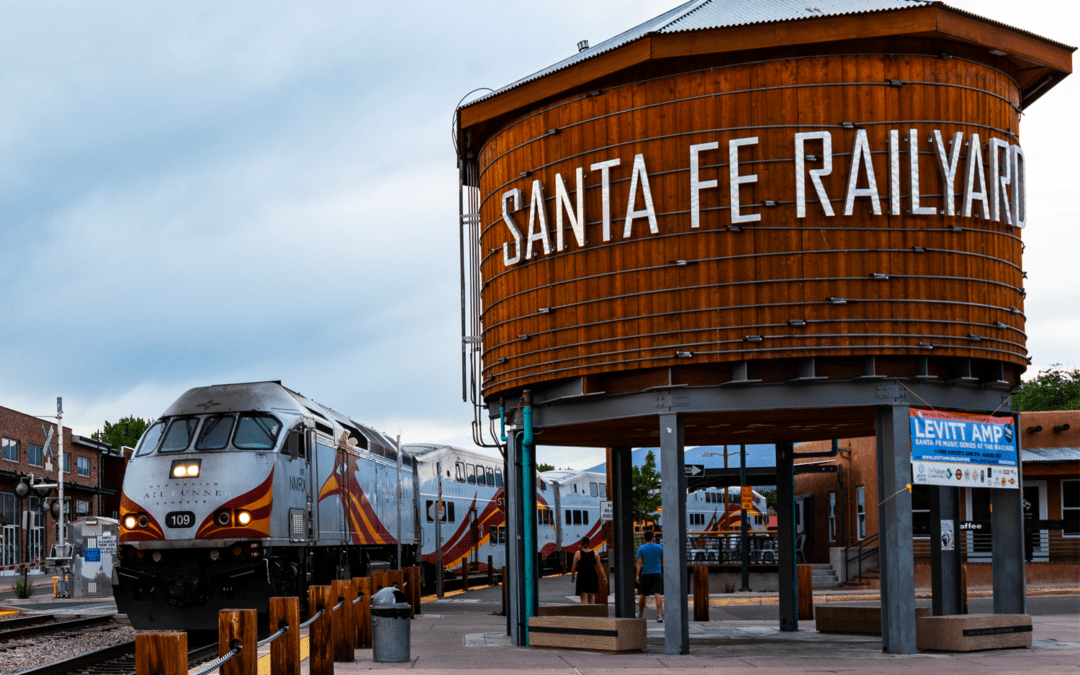 The Santa Fe Railyard is the modern-age counterpart to the much older Santa Fe Plaza. If the Plaza is Santa Fe’s historic and symbolic hub, the Railyard is fast becoming the city’s cultural centerpiece, as well as the premier arts and entertainment district for northern New Mexico. There you can find restaurants, movie theaters, breweries, markets, contemporary art, shopping, and live entertainment. The New Mexico Rail Runner Express offers direct access to the heart of the action with the Santa Fe Railyard at the route’s northern terminal. The commuter rail transportation service runs seven days a week between Belen, Albuquerque, and Santa Fe. If you’re local, you can take your bike out for a spin on the Rail Trail, a paved path for hikers and bikers running parallel to the train route. The Railyard Park is great for a stroll with the kids, where they can romp through the different tunnels and playgrounds. It’s dog friendly too!

Come and check out the Santa Fe Farmers’ Market year-round on Saturdays and Tuesdays from 8am to 1pm at the Market Pavilion in the Railyard. Shop local goods and produce from New Mexican farmers and craftsmen. Browse a selection of fresh veggies, fruit, chile, cheeses, meats, baked goods, original crafts, body care products, and more. The Farmers’ Market offers a variety of breakfast and lunch options, a gift shop, live music, and other special events. Come back on Sundays from 10am to 3pm for the Railyard Artisan Market, where you’ll find a variety of work from many talented local artists including jewelry, pottery, glasswork, and more. Santa Fe is known worldwide for its diverse art scene, and the contemporary galleries in the Railyard are second to none. The interactive exhibitions at Site Santa Fe, often utilizing a wide range of media, will pique your curiosity while shedding light on current issues.

The Santa Fe Railyard is a vibrant space with enticing distractions everywhere you look. Grab a draft beer and enjoy some delicious pub fare on the patio at Second Street Brewery’s taproom. Catch a feature film at Violet Crown, where you can order local cuisine to take inside the theater. No need to worry about parking – Violet Crown will validate parking when you buy a movie ticket. You can also see indie films handpicked by Game of Thrones author George R. R. Martin at his very own theater, the Jean Cocteau Cinema. Bring the kids and a picnic and watch family classics during the free Summer Movie Series on the grass at Railyard Park. The Railyard Plaza also hosts free concerts every other Saturday night during the summer under the iconic water tower. The Railyard’s Free Concerts Series runs from early June until the end of August and features world class live performances from around the globe. Once the city’s old shipping depot, the Railyard is now Santa Fe’s most trendy area. Outside magazine’s headquarters, the New Mexico School for the Arts, and a REI retail store are among the businesses found in today’s Railyard District. It has recently become the center of attraction for both Santa Fe locals and visitors.